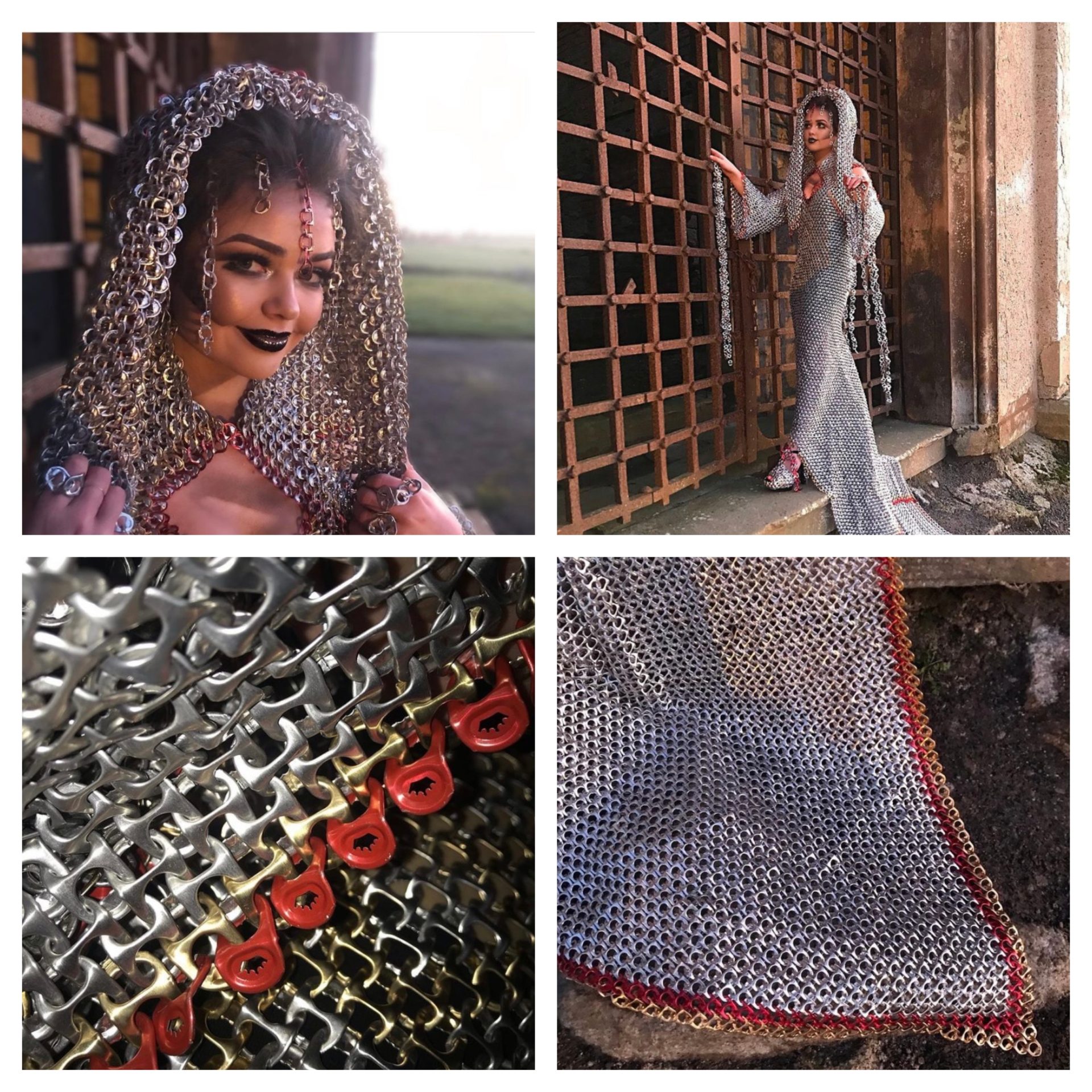 IT TOOK a year to collect the 63,000 ring pulls from drinks cans and a further six months to make it, but student and aspiring fashion designer Grace Maher finally had her masterpiece ready!

The 17 year-old leaving cert student from Tullow invested all those months into perfecting Element 13, her creation for last year’s Junk Kouture competition and her patience, tenacity and talent paid off when she won a place in the prestigious finals in March.

She and her fellow finalists in Junk Kouture should have been treated to a glittering gala ball and fashion show in the 3 Arena, but the global pandemic put paid to that idea. Instead, organisers restructured their plans and filmed all of the finalists separately in stunning locations near their homes. Grace’s own segment was filmed in Ballybeg House, Ballinglen near Tinahely.

The resulting show will be aired on RTÉ2 tomorrow Thursday, when the various winners and overall winner will be announced.

“I can’t wait for it! We’ve been looking forward to this since last March! I’m so excited to see what happens!” a nervous Grace told The Nationalist.

Grace’s biggest ambition is to scoop one of the scholarships on offer that would allow her to study art and design next year in one of her dream colleges – the National College of Art and Design in Dublin, or at the Limerick Institute of Technology. As a solo entrant she can apply for the exclusive scholarship prize, worth up to €10,000. Indeed, it’s been a dream of hers to become a fashion designer and has been lucky enough to qualify for the Junk Kouture finals before. When she was just in second year, she persuaded her art teacher in Tullow Community School, Kate Garnier, to let her enter the competition. She was the youngest entrant that year to qualify for the finals. Since then, she made a textile from re-used materials and has become a fervent believer in sustainability in fashion. Junk Kouture is a competition that has been running for the past decade in Ireland and worldwide, where the competitors have to design an outfit entirely of re-used materials. Grace’s parents Lorraine and Paul Maher from Tullow are completely supportive of their artistic daughter’s passion and talents.

Grace’s inspiration for this year’s design – called Element 13 because aluminium’s atomic number is 13 on the periodic table – came from seeing a young starlet wear a dress of chain mail on the Metropolitan Museum’s Gala Ball, one of the fashion industry’s most outré events.

Grace didn’t use any glue or threads in the making of her dress and instead spent months painstakingly bending and clipping the ring pulls together. The result is a dress that’s ergonomically fitted for her alone and her art teacher is quietly confident that Grace has impressed the judges sufficiently to garner some level of award.

“Grace made this all on her own, she did it all,” explained Ms Garnier. “She used no glue or wire or string, it’s all completely woven. The level of detail is amazing in the outfit. The design is ergonomically designed by her and for her. She has designed it to flow along with her body; it hangs on her beautifully. She has such a great energy about her, she’s like a bottle of fizz herself!”

Grace has already clearly impressed the Junk Kouture heads because last month she and just one other student in Ireland were selected by them to make a presentation about fashion and sustainability at the Abu Dhabi Sustainability Week.

Right now, though, the countdown has begun and Grace is waiting to see herself and her design on the national airwaves and to discover if she’s scooped any of the wonderful prizes.

There is an opportunity for the audience to vote for Grace’s design when the Junk Kouture fashion show finals take place tomorrow night, Thursday, at 7pm. To vote for Grace’s Element 13 log onto app.junkkouture.com.