Tullow 6th year student Darren McDonald has won the prestigious title of Irish Lions Club Young Ambassador of the 21st Century. The eighteen-year-old represented Carlow Lions Club in the final of the Irish category of the competition on the 20th January in the Carlton Airport Hotel. 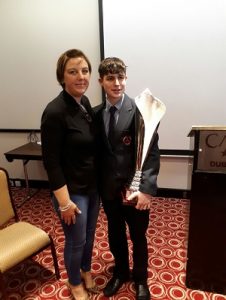 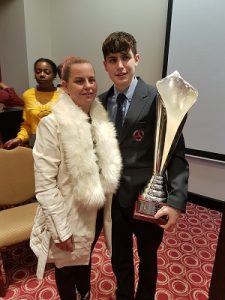 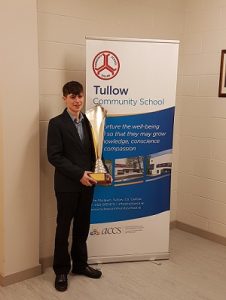 He will now go forward to compete in Dudley, Birmingham on the 23rd February and will represent Ireland at the Europa Fourm – the international stage of the Young Ambassador competition – which takes place in Skopje, Macedonia this October. Darren received the honour for his extensive community work and civic projects. While his volunteering projects are too numerous to mention, one of his main areas of community involvement is with the Bishop’s House youth support services in Tullow where he is youth chairperson. Darren volunteers two to three evenings per week in Café Jam Rock where he supports and engages with the young people who attend.  His second major area of community involvement is with St Laserian’s School in Carlow which caters for students aged 4-18. The students present with learning difficulties in the range of Mild, Moderate, Severe and Profound General Learning Disability. The catchment area for St. Laserian’s is approximately within 25-30 mile radius of the school, encompassing Carlow Town and County and areas of Laois, Kildare, Wexford and Wicklow. Two of Darren’s brothers have attended St Laserian’s. Darren and his family feel indebted to the school for the care they have shown the boys, the life skills that they have learned and the support and encouragement that the family and the boys have received from the staff there. For the past number of years, Darren and his mum Anne Marie have fundraised extensively for the school. This academic year, Darren has set himself the target of raising €6000 to help the school purchase a much-needed new wheelchair accessible bus which will play a vital day to day role in the school.

A Leaving Cert student at Tullow Community School, Darren is a son of Anne Marie and Brian McDonald. After his win, a clearly delighted Darren said: “I went in to this stage of the competition feeling proud and happy to have got so far. Whatever the outcome, I would have been delighted with the opportunity to represent my town, my school and my county”. Darren received a bursary for €600 as part of his prize which he will be donating to St Lasarian’s.

Family, friends, and Jack Morley representing Carlow Lions Club travelled to Dublin at the weekend to support Darren. Darren was back in school in Tullow on Monday morning to begin preparation for his Leaving Cert mocks this week. He received a rousing applause from staff and students alike. His trophies will be proudly displayed in the school’s foyer. This is Tullow Community Schools second time to have a student reach the international finals.

If you would like to support Darren’s endeavour to raise €6000 to part fund a new wheelchair accessible bus for St Laserian’s school in Carlow, please see his gofundme page – https://www.gofundme.com/DarrenMcDonald